Why the devil bit the reed 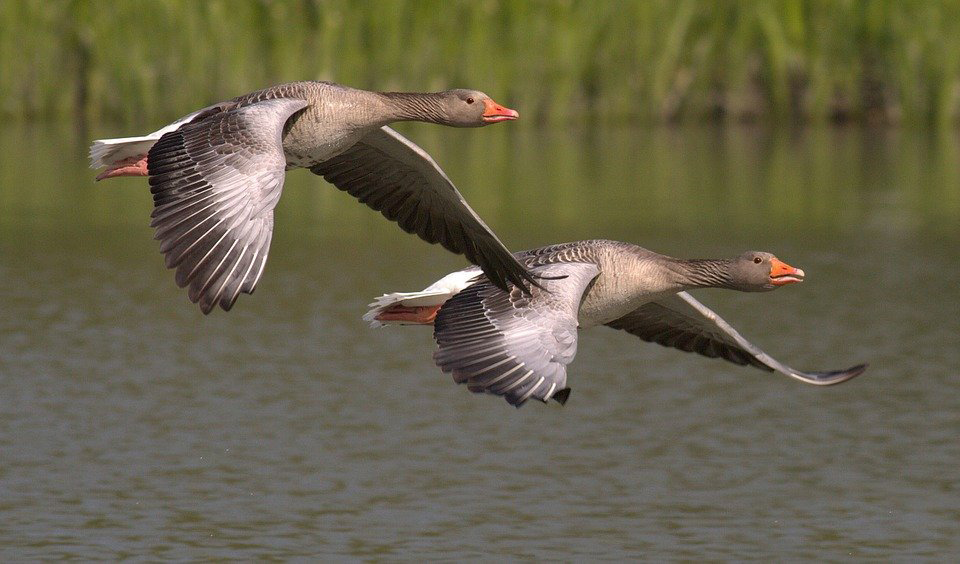 Geese have keen senses that make them ideal as guards. When they sense danger, they make a slight barking noise and can rage against intruders just as fiercely as dogs. Hence, they acted as guardians of shrines in ancient times. In later times geese were often used by farmers as watch birds in the protection of their property. You can read how that came about in this new fairy tale.

Young Anser's family was attacked by a pair of hungry bears who were looking for prey far beyond their territory due to the prolonged snowfall. Desperately, the adults tried to save themselves and their children, but they were powerless against the raw power of the starving bears. As if transfixed, Anser watched from her hiding place as her relatives were crushed under the brutal clutches of the predators. It was a horrible massacre.

After the bears disappeared back into the woods, Anser took care of the injured. She tended their wounds, gave them water to drink thawed ice, but in the frozen and snowy earth she could find no food to help the wounded regain their strength. As a result, they all eventually died. Lonely 12-year-old Anser wandered through the swampy fields between the Rhine and the Maas, hoping to meet a traveling family who wanted to take her in. But no one wanted to feed an extra mouth. She traveled through swamps, forests and plains where the sea penetrated in harsh times and swam over rivers that burst their banks in the spring. She lived off the eggs, berries, nuts, and seeds she found along the way, and when she couldn't find anything edible, she ate grass. With the images of the bloodthirsty bears still on her mind, she was extremely vigilant of potential danger. She found she could scare off animals by making loud, slightly barking noises or mowing threateningly with both arms. One day while wandering through the vast bog forests, starving, she discovered that the family who had chased her away the day before were serving the gods daily food. For weeks she secretly followed the group to eat their offerings after dark. Hunger overcame her fear, knowing she was displeasing the gods and that it would end badly for her. Every time she promised, “Dear gods, I will make up for everything and give it back as soon as a family takes me in. I have to steal or I will die. ”

One day she with a young man who was also wandering around alone. They moved on together. They felt safe together and gradually their friendship turned into love. The boy turned out to be an agile hunter who never returned from the hunt without loot. Faithfully, Anser left small gifts for the gods at every sacred place they passed as a thank you for surviving and for being so kind to her companion.

A few years later, during a severe storm, Anser and his husband and children sought shelter in the woods of the delta of the Maas. There was a frightening thunder and lightning destroyed their shelter. Overcrowded rivers flooded the land. The full moon lifted the sea water higher than ever before, and severe storms pushed the water into the land in a furious and raging way. Water had never been her enemy, but Anser felt that this deluge was going to swallow them all. This was the punishment of the gods for the food she stole from them in the past. She roared desperately into the storm: "God of heaven and thunder, if we survive I will make sure that no one will ever steal another holy place!" Did the god answer her plea? Just as the waves were about to swallow her family, they turned into sturdy, gray-brown birds that could take flight just in time. Anser flew in front, away from the storm. For days they marched south until they saw a temple in the distance on top of a hill shining in the sun. There they settled - never to leave. As Anser, driven by her own experiences, took every goose who roamed and sought safety into her family, the group of guards at the hill temple soon grew so large that they could fly to shrines of other gods to watch them too. guard against visitors with bad intentions.

Geese are in many ways like humans: they live in large groups, are very smart, watchful, take care of each other, are monogamous, have fun together and the children grow up in day care centers - though some of these characteristics are in humans subject to erosion…

Until a few years ago, the geese hibernated en masse in the Netherlands and Belgium, to migrate several thousand kilometers north in the spring and to breed in Scandinavia and Northern Russia. Thanks to breeding and fertilizers, the short-cut grass in our pastures is just as rich in protein as the young grass on the tundra in the far north that the young geese need in the spring. More and more geese are therefore no longer moving away in the spring, especially greylag geese remain in large numbers. Go to the Wadden Sea or the delta of the Scheldt in winter and enjoy the whiz of hundreds of geese wings at sunrise that migrate t