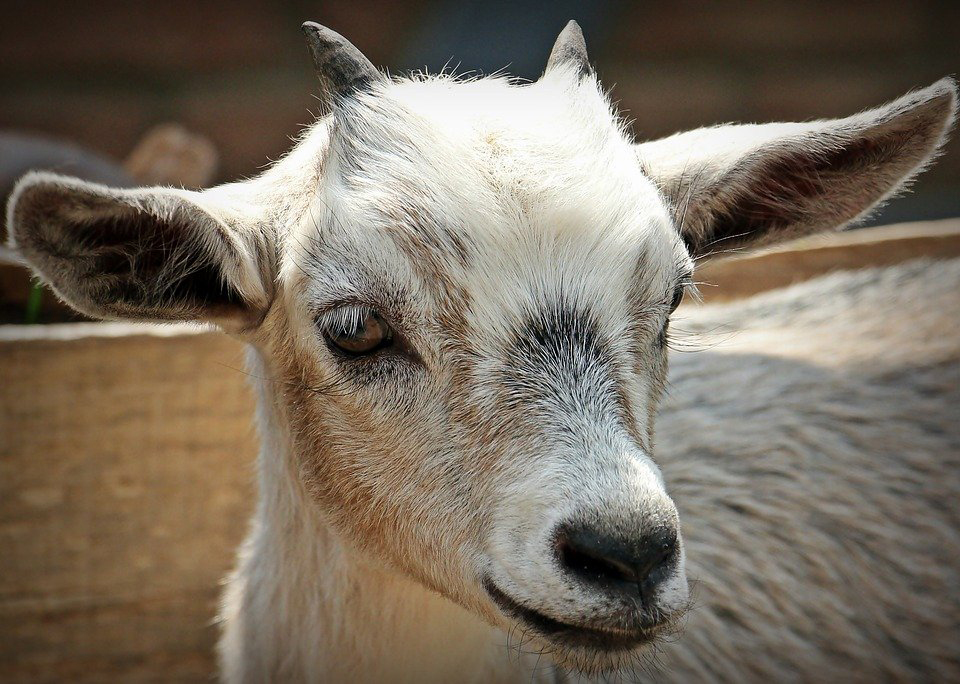 There are many stories about how animals were created, about the fight between good and evil, between God and the devil. Have you ever noticed though that goats have the proverbial ‘look of the devil’, not to mention his horns to go with it? The devil tries to destroy everything that crosses his path. What about goats? They appear so playful, they disarm and charm you, but no bush of plant will survive in a field full of goats. Almost everything which grows will fall prey to the All-devouring Goat. Only plants with thorns can survive. How did this come about? Well, it is an old story. Come close and listen:

Now the devil was truly chuffed with himself for having created poisonous toadstools, stinging nettles causing a nasty and cowardly hyenas to boot. He took devilish pleasure in creating any plant or animal which made life hard for another. One day he set his mind to creating a new animal. It had to be an animal that had an evil nature like his own as well looking like him. After a day spent kneading and modelling he was satisfied with the result: an animal he called ‘goat’. Its coat of bristly hair was a grey and dull brown colour. Out of the top of his head sprouted two dark sharp curved horns. His eyes were the spitting image of his maker’s.

This devilish creation ate almost everything which was green and juicy: grasses, young saplings, tender flowers. If there was nothing else to eat in the winter, he scraped the bark from the trees which then withered away and died. Areas where herds of goats lived very soon changed into barren open spaces. Only thorny bushes survived which were too sharp for the sandpaper like tongues of this creature. After a herd had eaten everything growing on a plain, it simply moved onto new grazing grounds, leaving behind them the other animals to hunger. These creatures complained to their Creator: “God, can’t you do something to limit the gluttony of these goats? All our fertile meadows are being turning into barren deserts and we are going hungry.”

God called the devil to account. Grovelling but still defiant, the latter responded to God’s charge: “Every creature is a reflection of his creator: the good ones of you and the evil ones of me. Why would you expect anything else of me? I am focused on cowardice, cunning, illness, destruction and darkness. I can only create beings in my image and likeness.”

Upon which God sent his wolves out to kill the goats. Surrounded by a mist of stinking sulfurous vapours the devil rushed to God and demanded compensation. God replied:”You can come and fetch your money on the day all the trees have lost their leaves.”

That autumn the devil knocked on heaven’s door to collect his gold coins. The doorkeeper said:”Use your eyes and you will see that many oak trees still have their leaves! Come back when those trees are completely bare too.”

When winter arrived with its snow and frost, the devil looked dejectedly at the brown oak leaves still firmly attached to their twigs. Angrily, he brought all the remaining goats to the wood and ordered them to eat every leaf on every tree.

They did their best, but even standing on their hind legs, they could not reach much higher than a meter. Upon which the devil climbed into the trees himself and bit at all the leaves in a wild attempt to rip them off. But even he did not succeed. The leaves remained on the twigs. Finally, beside himself with rage, the devil let himself slide down the tree trunk. As he did, he gouged deep grooves with his sharp nails in the bark. Ever since that day you can easily recognize an oak by its leaves and its trunk. Not all the leaves have dropped off in the winter and those remaining have bits bitten out of them. Down the length of the trunk there are deep grooves.

Our domestic goats are descendants of the wild bezoa goat (capra aegragrus). Amongst other things they eat grasses, moss, twigs, bushes and herbs. They mostly live in rocky areas and can happily survive in the wastes of high mountainous regions. They are also to be found not only on islands in the east of the Mediterranean, such as Crete and Cyprus, but also in Iran and Asia. Things are not going well for the bezoa goat and he is becoming increasingly rare in the wild. By contrast, the domesticated, farm bred goats are thriving in many parts of the world. They are bred for their milk, cheese (feta) and meat.