Why the devil bit the reed

A Gelders saga about Witte Wieven 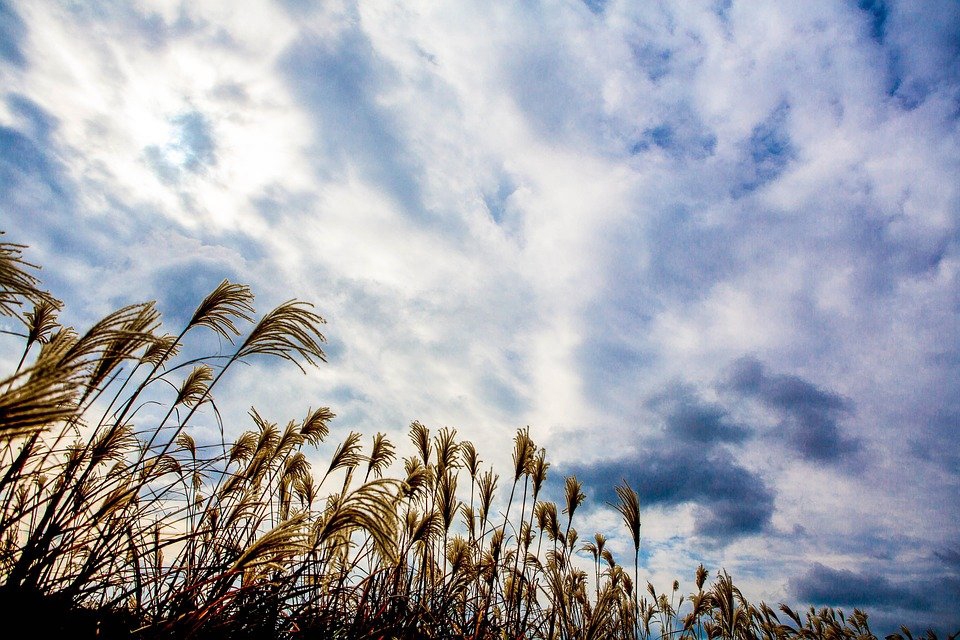 A long time ago the devil took a bite out of every leaf of the reed because he was so furious at having lost his wager with God. The proof of this is still visible in the three small points which you can see in the middle of the long narrow reed leaf. Hence the common name the ‘devil’s bite’. The reed is a beautiful and special plant. How it came to grow here on earth is told in this old and slightly extraordinary (!) legend. Come closer and listen:

When God had created the earth in six days, He rested on the seventh. The following week He improved on some details of his Creation here and there, but after that he had clearly finished his work of art. During those first few weeks God really took pleasure in being able to sit back and enjoy his wonderful Creation, but then He began to grow bored. It soon became clear, however, that not everything was quite perfect: there was an evil presence at large. The devil could not stand it that God had created such a magnificent world and he was busy sabotaging matters now and then. Through his wicked intervention some plants caused dreadful itching when touched; roses grew sharp thorns. But even the devil got bored from time to time. One day God and the devil bumped into each other during a walk and discovered that they were both bored. “I’ve an idea. Why don’t we play a game together now and then when we are feeling bored?” God asked and the devil agreed that this was a good idea. There was only one rule: there always had to be a winner. God won most of the time much to the intense irritation of the devil.

One day God felt in need of a challenge and knocked on the devil’s door. “God,” said the devil, “I have an idea for a very difficult game. One of us has to create the most beautiful plant on earth, a plant that doesn’t exist as yet. It also has to be better and more beautiful than all that has been created up to now.” The idea appealed to God, so he agreed. They gave each other a week’s time to create this new plant. Both God and the devil had a good time that week and worked enthusiastically on their new inventions. By the end of the week both were convinced that they would win because they had created something truly special. When they met up seven days later it was a beautiful summer’s day. The devil allowed God to go first. After a short walk God pointed to a meadow full of tall grasses. “Now take a look at that! ”He said to the devil, “Look just how amazing this plant is as it sways in the wind and turns a splendid yellow golden colour in the sun. I have named it “Grain”. The devil tuttutted and replied: “It is wonderful. I absolutely agree with you that it is very beautiful indeed. But now you must come with me. I think I have made something that is even more beautiful.” He asked God to walk with him up onto the dike. “Look,” said the devil, “I too have made a special plant. Just come with me and see how spectacular this field is. It looks different in every season. In the spring this plant is small and is a soft pale green colour; in the summer it has purple sprays which turn to gold in the winter. And the wind rustles in its leaves. I have called this plant “Reed”.

God was impressed by the new plant. “Your creation is without doubt beautiful.” The devil laughed proudly. “But,” God went on, “While I have to admit that your plant is amazing, I think my field of grain is more beautiful. It is more subtle. I believe that I have won this wager.” The devil did not agree at all. They debated about the outcome on and on the entire day, but were unable to reach a satisfactory conclusion. However, at the outset they had both agreed to the rule that there always had to be a winner. Now it looked as if they were about to have their first draw. Just at that moment two people walked by. “Adam and Eve,” called out God, “thank goodness, you two have come along just at the right time. We have been having a competition to see who could make the most beautiful plant. But we cannot agree as to who is the winner. You choose who has made the most beautiful plant. You are now the jury.” Adam and Eve were amazed by the beauty of the fields and said that both plants were truly beautiful and that it was a draw. But neither God nor the devil would accept this. Only one of them could be the winner. Adam and Eve thought about it for a long time and then Eve said. “Actually, we think that they are both equally beautiful, but if we have to choose, then the grain is the winner. Because grain is also food for us humans.” At that the devil flew into a terrible rage. He had never created anything so beautiful and once again God had won. Beside himself with frustration and anger he bit the leaves of the reed. That is why to this day the marks left by the devil’s sharp teeth are still visible in their leaves.

Thanks to the devil’s toothmarks we can distinguish reeds from other members of the grass family. Increasingly more constructed wetland filters are being created to clean river and ditch water. Tthe most commonly used plants are reeds and bulrushes (American English: reedmace). A constructed wetland filter works as follows: firstly, water flows slowly into a shallow ditch so that chemical pollutants and heavy metals sink to the bottom. From time to time the sludge is removed and transported elsewhere. Then the banks are widened and made to slope gently away from the water’s edge. Reeds and bulrushes like the humid conditions on the edge of these constructed waterways and thrive there. These plants absorb the phosphates and nitrates into their stems. In the winter the reeds are cut and taken away. Clean water then flows into nature reserves. By then the rich water has lost its nutrients, allowing more oxygen into the water. This discourages the growth of algae which is better for most water plants and animals and results in a greater biodiversity. In fact these constructed wetland filters should be introduced everywhere, because the surface water in The Netherlands needs to be clean for the benefit of both people (children) and animals. These filter strips are ideal for amphibians and birds, as well as creating optimum egg-spawning conditions for fish. Even in the heart of Amsterdam there are constructed wetland filters in the canals. An example of this is the Lijnsbaan canal.